A language for querying structured data.

please i dont want to use it again

Use of Ubuntu and Debian as a base OS for other layers of the stack, including hardening, maintenance and other administration.

Ensuring that data was stored, secure and accessable, involving general database administration, backups (of both data and the data folder) and other modifications to increase efficiency and reliability.

Both for Apache and CLI.

Whilst generally this only involved writing code, this could also include making configuration modification to allow for better service.

Generally, Docker worked well by itself, with my interactions being limited to the creation and management of services and containers, ensuring they interacted well with the rest of the system.

Javascript on the Server

Working with node ranged from single purpose microservices and command line applications through to large systems incorporating multiple datasets to provide information to end users. This also included setting up management (for those systems not ran through Docker), and ensuring they worked with pre-existing systems.

SysAdmins who Develop, and Developers who SysAdmin.

Working with the multiple technology stacks on the server, combined with DevOps software such as GitLabs, my role as a developer shifted over to DevOps, writing code, ensuring it deployed, testing it, and making sure works.

git and svn, through GitHub, GitLab and BitBucket.

VCS ensures that changes can be tracked back, breaking changes can be reverted and everything's logged, whilst also improving productivity through branches, merges and other protections from overwriting code.

Throughout my development career, I've both had to ingest REST APIs to find data and make changes, whilst also writing REST APIs to expel data and ingest changes.

Webhooks are just REST APIs that push data, really. Just like with regular REST APIs, I've had to both write code that pushes webhooks and ingests them. This includes webhooks from multiple sources, such as GitHub, Ghost and GitLab.

Whilst I have only recently worked with Windows Server, it has been important in the development of my skills further, especially considering its use in SME.

From smaller setups for forwarding system mail, through to larger setups including implementation of SASL auth, DKIM keys and integration with external user directories, postfix has been fun to work with, if a pain at times.

Similar to Postfix, I've used Dovecot in a variety of situations, from simple flat-file logins through to external directories with SASL auth.

Though only a recent addition to the Photon Core team, I've put in large amounts of effort, from improving use of VCS within the team, to building notification services. This is combined with code provided to the Photon Lighting Engine core. 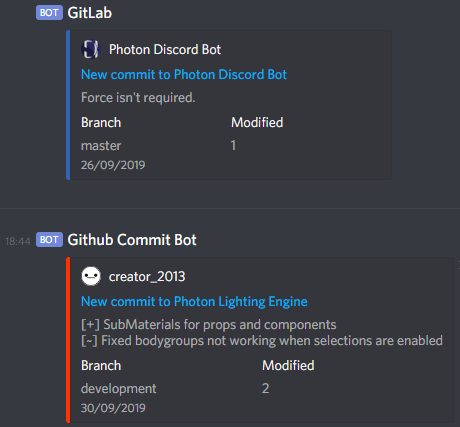 L² plates is a system written from the ground up in Garry's Mod, using Lua as an embedded scripting language. The plugin itself is sold on GModstore, with a more advanced build system having been built around it. This system includes a set of docker containers, running a database and API service for the development tool, and a GitLab pipeline for building and deploying the addon versions, along with both the ingame system and development tool. Within Limelight Gaming, as the development lead, a major part of my role has been improving team efficiency. Our team is compromised of a small number of developers, most of who work on Limelight as a secondary or tertiary job.

With this has led to an improvement in the soft skills: People management and conflict resolution. This has been of key importance here, if one person leaving drops staffing by 15%, each person is key.

With such a limited staffing level, we've also have to develop custom stacks in order to improve our workflows. For example, a system I developed was the suggestions management console, a key part of improving our suggestions workflow. 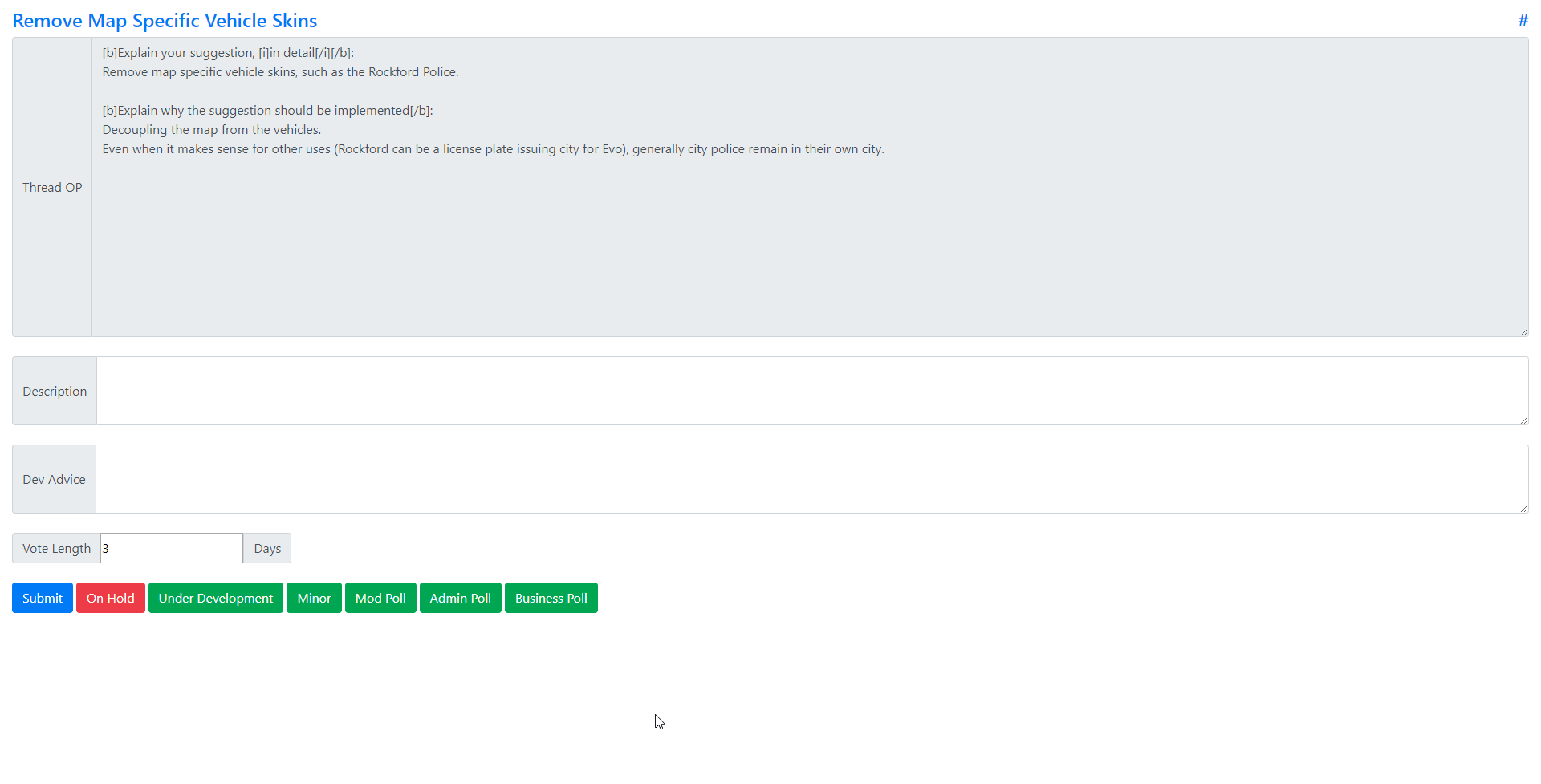 This has led to a 50% decrease in the time spent processing internal suggestion reviews. Many part of this system are also fully automated, from polls to requesting review to automatic closing.

Whilst for many a boring subject, data protection is of key interest to me, hence why I put myself forward for for the data protection role. Within the role, I worked on improving compliance with regulations (including the GDPR), implementing workflows for subject requests and training other staff to improve data protection throughout the company.

One of the major updates I worked on for Limelight was the Emergency Vehicle Update. This involved working with myself and three other texture artists to create new liveries and configurations for over 80 vehicles, creating over 70 liveries and hundreds of configurations.

Just one of the vehicle configs.

Despite some issues with one of the texture artists becoming unavailable, and some disagreements between the artists and other staff members, the update only released a few weeks late (impressive considering multi-week delays that happened during development), this not only allowed me to work on other development skills such as texture work, but also allowed development of the soft skills. 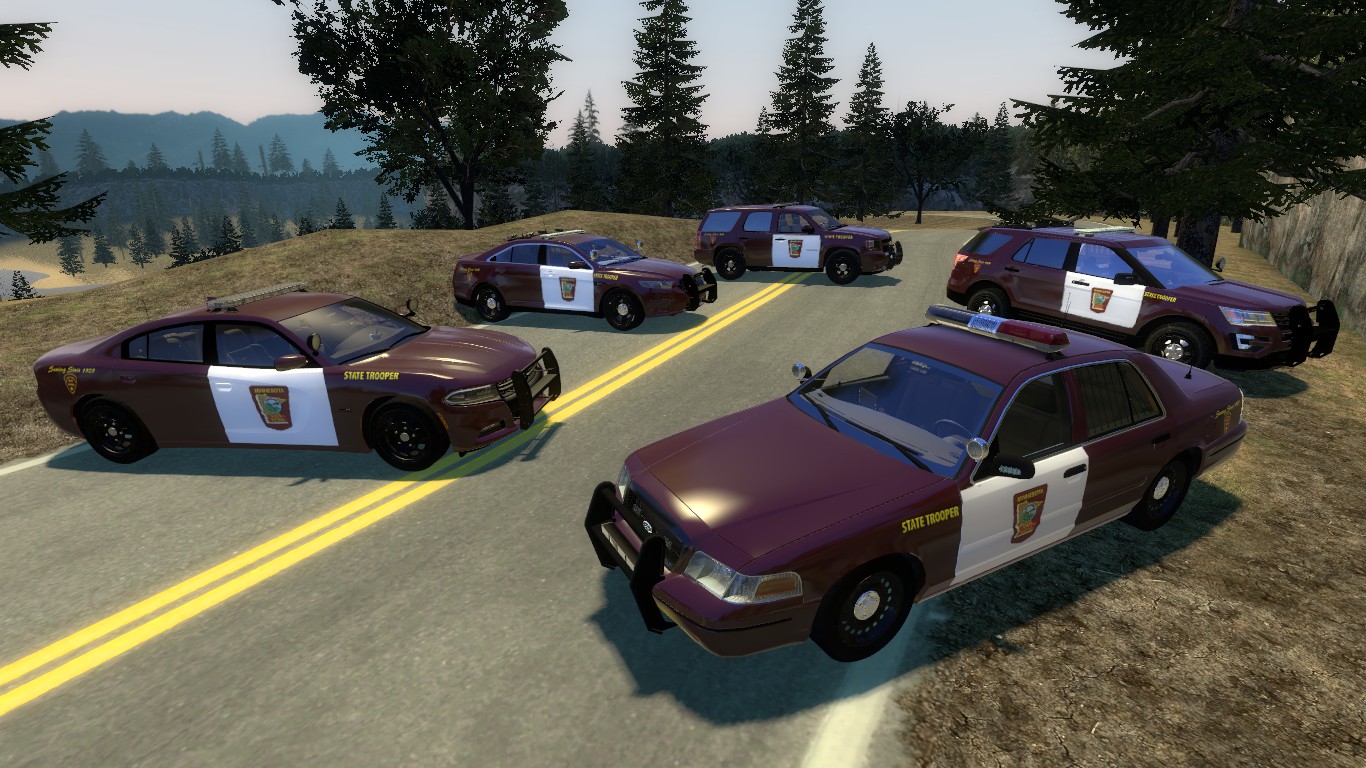